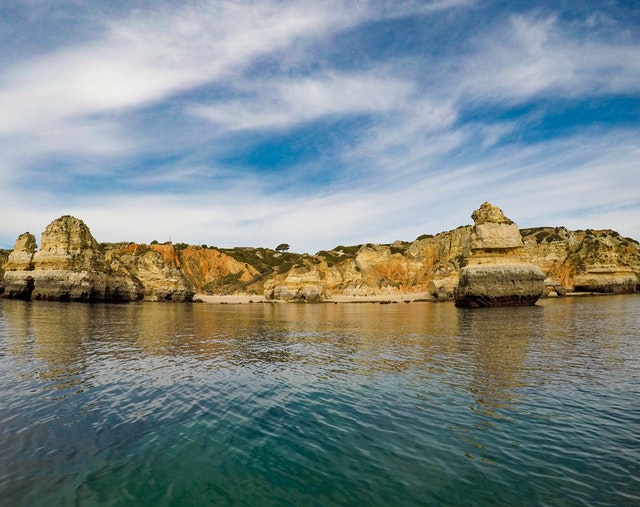 Located in the Algarve region in southern Portugal, Lagos consists of both tourism and history. One of the most popular cities in the region, Lagos boasts a variety of hotels and restaurants.

Lagos was the city from which many of the voyages brought on by Henry the Navigator originated in the time when Spain and Portugal were at the forefront of discovery. The golden church of Saint Anthony is a main attraction in the city, having been rebuilt in the 18th century.

Oludeniz, meaning “dead sea” in Turkish, is a small beach town located on the southern coast of Turkey. It is home of the distinctive Blue Lagoon, which is one of the most recognizable beaches in Europe.

Oludeniz is famous for paragliding, and is popular with hikers due to its location in the shadow of the Babadag Mountain. Oludeniz hosts the annual International Air Games, showcasing paragliding and displaying other air sports and games.

The resort town is also within driving distance of Hisaronu, a small town away from the beach consisting of restaurants, shopping, and hotels. While you can keep yourself busy in Oludeniz during the day, Hisaronu will keep you entertained in the evening and night hours.

Valencia is the third largest city in Spain after Madrid and Barcelona. It is where the famous Spanish dish of paella originated, but that is not all it’s known for. The Falles festival takes place in the early spring in Valencia, praising Saint Joseph, the Virgin Mary’s husband. The festival lasts for five days, and the city does not sleep during that time with bands and endless processions it would be impossible to.

On the cusp of both Europe and Asia, Istanbul is a vast city with a vast history including several empires. One of the most iconic attractions in a city full of iconic attractions, is the Hagia Sofia, or Ayasofya, mosque. Originally a church built in 550 A.D., it was converted into a mosque by the Ottomans after they conquered Istanbul in 1453.

Istiklal Caddesi is the street to turn to for food, shopping, and entertainment. Turkish cuisine is different in every part of the country, but Istanbul is where these tastes come together. With Ottoman kitchens offering dishes from the past, “wet hamburgers” from street vendors, and kebabs, your stomach and your wallet will not be unhappy in Istanbul.

Dublin is a small but charming city that offers the allure of city life while still staying low-key. It is an expensive place to visit, but the price is well worth it. Dublin has a countless number of pubs, as it is the birthplace of Guinness beer, and the Guinness Storehouse is by far the most popular attraction in the city. A tour of the Storehouse includes a free pint of Guinness and an amazing view of Dublin.

If you’re traveling on a budget, Dublin does offer some attractions for free. The national museums are free to enter, including the National Gallery and the National Museum of Ireland Archaeology and History.

Munich is home to the world’s most famous beer house, the Hofbrauhaus. The Hofbrauhaus was built in 1644. Open daily, it offers food, music, and most importantly, beer. Munich also has historical and modern attractions. The Nymphenburg Palace was the summer home to Bavarian royalty. With a park and several museums within and surrounding the palace, you should plan to spend a few hours here.

The BMW museum has a distinctive shape in Munich’s skyline. An exhibit in the museum explain the evolution of BMW and automobiles, and offers an interesting vision into the future of transportation.

If you’re looking to go shopping, Vitosha Boulevard is where you want to be. Vitosha Boulevard leads to the Vitosha mountain from which you can get spectacular views of Sofia. The National Palace of Culture, where concerts and performances take place, is also located on the boulevard.

Naples is one of the richest cities in Italy, both financially and culturally. Naples is a major transportation hub in southern Italy, where several main train lines meet. There is also an airport, ferries, and buses that connect Naples with the rest of Italy and its islands.

Pizza originated in Naples, so it is imperative that you eat some while there. Being a coastal town though, seafood is also abundant. The National Archaeological Museum offers one of the most extensive collections of Greek and Roman antiquities. Some of the museum’s content come from excavations of the nearby site of Pompeii.

Located on the French Riviera, Nice is one of France’s most populous cities. Though a cosmopolitan city, Nice offers many escapes from the fast-paced place it has become over the years.

French artist Henri Matisse was inspired by the city of Nice, and the city was the backdrop of many of his famous paintings. The Matisse Museum in Nice pays homage to his art, and puts much of it on display from his early years to his last works.

The Russian Cathedral is a site that will surprise you during your stay in Nice. A traditional Russian Cathedral with onion topped towers, if you know that Russian aristocrats used Nice as a vacation spot, you won’t be as surprised by the old Russian influence scattered throughout the city.

Stockholm is a modern city with a lot of culture and an appreciation for the arts. With the Royal Dramatic Theater and over 100 other theaters and museums, it doesn’t end there. There are also outdoor exhibits year round. The Nordic Museum explains Sweden’s extensive Viking heritage and is worth setting aside a few hours to peruse the information it has to offer.

Stockholm’s annual Jazz Festival takes place in July and displays not only Jazz music, but everything from pop to rock as well. A clean and environmentally friendly city, Stockholm also hosts the Green Festival, which celebrates the environment. Entry is free, and food, entertainment, and drinks are also offered.